The police came equipped with personnel, sten guns, tear gas and water cannons; All this to contain a group of Sunday church-goers comprising senior citizens, youth, middle-aged folks and school students, and their clergy who wanted to have their voices heard.’ 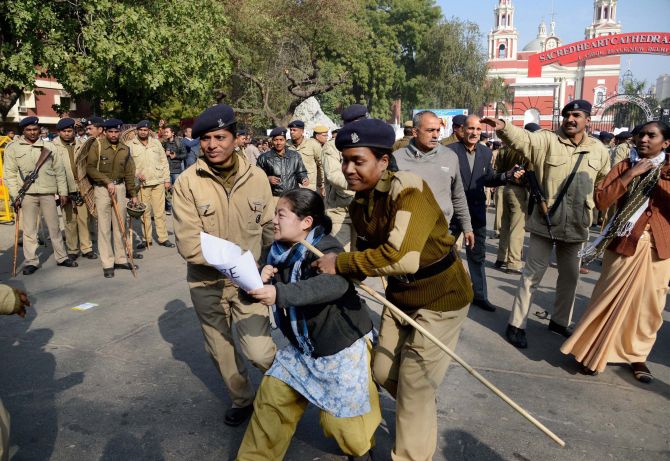 Active citizenship through peaceful protest is a powerful tool, says Merril Diniz who was part of a peaceful march to highlight the church attacks in Delhi.

Last week, my fiance Stanley and I got wind of a protest to be held outside the Sacred Heart Cathedral, one of New Delhi’s most prominent places of worship for Catholics. The agenda was to stage a peaceful march towards Home Minister Rajnath Singh’s residence, to voice the community’s ongoing concerns about the security of churches across the country.

Five churches in Delhi had been vandalised in a span of just two months. Registering FIRs was proving to be a nightmare, and these attacks were being projected as isolated incidents, and in some cases, theft.

The truth is that not as much as a piece of paper went missing. None of the perpetrators was brought to book either.

The protest was to be held at 9.30 am on February 5. Word spread via social media with the hashtag #stopacttacksonchurches and #stopattackingchurches. Several event pages mushroomed on Facebook, including one started by Stanley.

Solidarity came from all quarters — Christians and non-Christians — who were against attacks on any place of worship.

On February 5, Ashoka Marg, which leads up to the cathedral, was barricaded for vehicles. We began walking, and noticed buses packed with CRPF personnel and cops, heading in the same direction. It was business as usual for traffic at Gol Dak Khana, where the cathedral is located. But quite a number of buses strategically lined the entrance to the cathedral, thus cordoning off the view from pedestrians and passing vehicles.

Dozens and dozens of men and women in uniform were gathered around the gates of the Cathedral, and protestors along with their placards were being manhandled and hauled into buses. They comprised men and women of all ages from both clergy and congregation.

To witness this in the flesh was surreal, and it took us a few minutes to gather our wits about us. Obviously the sight of so many cops at one venue is by itself unnerving, and that is exactly the effect they wished to create. The police force came equipped with personnel, sten guns, tear gas and water cannons; quite obviously they had left no stone unturned.

And all this to contain a group of Sunday church-goers comprising senior citizens, youth, middle-aged folks and school students, and their clergy (priests and nuns), who wanted to have their voices heard.

I enquired with some CRPF personnel, who were called from outside the state, why people were being arrested. They said they were clueless. When I explained the reason behind the protest, they seemed horrified at the task ahead of them.

Evidently, women and men in uniform often have to perform tasks of which they have no clear understanding, or inclination towards. Media presence was limited at this juncture, and we began taking photographs and videos with a vengeance and uploading them on Twitter and Facebook. We wanted the world to know.

Around 350 protestors were soon taken to the slammer and it almost appeared as if the number of cops outnumbered the number of protestors who were forced by the police to retreat into the church compound; it seems they had imposed Section 144 barring assembly of people in a public space. However, the crowd did not disperse.

The intimidation tactics only edged people on, and they continued shouting slogans like ‘justice’ and ‘protect our churches’. They moved on to singing patriotic songs, as well as the national anthem.

The cops looked uncomfortable, yet they had to continue with this charade until the protestors were tired out. As national and international news cycles began reportage, more TV news channels showed up, and reporters tried getting access to the protestors inside the church compound. However, they were prevented by the cops from entering the compound. They were also not allowed to approach the compound walls to engage with protestors on the other side.

As women protestors came to the forefront, male cops surrounding the cathedral gates were soon replaced by women constables. No more arrests were made. But some communal elements infiltrated the crowd and tried to politicise the event, and some even tried to instigate a mob.

As the day progressed, tea was served within the Cathedral premises and protestors took a break. The sun was out despite it being winter. In about 20 minutes the protestors were back, shouting slogans with renewed vigour.

A group of us took the mikes and sang hymns. A nun who had just come from Kolkata sang the loudest. It became apparent that the crowd had no intention of dispersing.

A crew from Al-Jazeera arrived as well as several Malayalam news channels, and select clergy leaders were finally allowed to give interviews.

Word came that the home minister had finally agreed to release the protestors, and meet leaders of the community to understand their concerns. This group included activist John Dayal and Father Sebastian from the archdiocese of Delhi.

As the meeting was in progress, the police allowed the crowd to gather just outside the gates. Around this time we spotted three commandos with AK-47s, a scary sight for unsuspecting pedestrians. So, as a precautionary measure, a senior priest requested the crowd to retreat into the church premises, as all it took was one miscreant to create a commotion. The protestors did as instructed and waited patiently.

After the meeting, community leaders returned to the venue and addressed the protestors about the outcome. They had shared their concerns about the lack of cooperation from the police when registering FIRs post the attacks on the churches.

Other concerns included the rejection of visas for Vatican delegates, and the need for 24×7 security for churches in Delhi, especially at night.

According to them the home minister had instructed various police commissioners across the country to offer their cooperation, and took note of their other concerns.

A senior clergyman then said a prayer for peace and advised the crowd to disperse quietly, but not before another priest shared that the day’s events had deeply rattled his faith in the Delhi police.

It was a moment of shame for the cops, who are obviously put in a difficult position in such situations.

While this event proved to be a PR disaster for the Indian government, it gave a voice to Christians in India.

It is testimony that active citizenship through peaceful protest is a powerful tool. Every tweet, every Facebook update, every like, favourite and share counts, as does the presence of every protestor who chooses to come out on the streets and speak up for his or her rights.